EPA Webinar: Creativity – What it means and how to nurture it 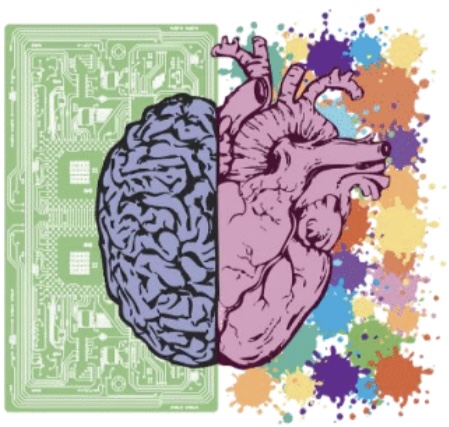 “Creativity: What it means and how to nurture it”

The webinar started with the welcoming words by the president, Víctor Petuya, to the EPA members and other organisations that were attending the webinar. He reported that the topic for 2021 was “Creative Parents – A Resource for the Future of Education” and that during the year, EPA is focusing on this topic and is giving priority to its participation in meetings and conferences related to this topic. So within this scope, EPA had organised this webinar on Creativity. Victor thanked Sushant Kalra, the keynote speaker, and outlined Sushant´s background in manufacturing, finance and teaching before he went on to develop the  Parwarish Child Development Model. He is now a parenting coach and teacher trainer, having trained more than 25,000 teachers across India and 20,000 parents from around the world. Sushant is also the winner of the Courageous Class Award by Kenneth Cole Foundation for the work done in the field of empowering parents and educators.

Before handing over to Sushant, Victor mentioned how creativity is an important asset mentioned in many European Union and United Nations´documents. For example, in the most recent recommendations on key competences for lifelong learning adopted by the Council of the European Union in May 2018 it says skills such as critical thinking, problem solving, team work, communication, creativity, negotiation, and analytical and intercultural skills are embedded across the key competences. In children’s education, creativity is mostly linked to schools but it also important to teach creativity at home. However, research shows that parents are unfamiliar with its definition, the meaning of creative thinking skills and the characteristics of creative people. This seminar will hopefully show parents how they can accompany their children in the continuous development of their creativity.

Sushant thanked EPA for this opportunity and started by explaining that this section of the seminar was for the attendees and would be interactive. He stated that by the end of this session, the attendees´opinions of where their children are now would have changed. He took a couple of minutes to talk about the work they had been doing in India and around the world and explained that his organisation worked with parents to ensure their children were happy, healthy, successful and secure. He explained the difference between happy (a profound, deeper emotion) and pleasure (the feeling someone has when watching a film, making a new friend, being given chocolate), that being healthy and feeling secure covered physically, mentally, emotionally, socially and spiritually, and that being successful was producing results that children really wanted for themselves. His organisation also works with parents to help them have a joyous and fulfilling sense of parenting every day. Sushant asked the participants to take 30 seconds and remember the moment that they held their firstborn child for the first time and then asked them how that felt (participant interaction). Obviously, it was a very special, divine, beautiful moment etched in their memory. Therefore, a critical element of his program is helping parents to have that experience every day.

Sushant then moved on to speak about what was creativity. He shared a stick figure picture and asked the participants what they could see (participant interaction: a flower or tree growing, a bird, a person with open arms and hair). He asked the participants how creative they currently consider themselves to be (a Menti creativity activity was shared for participants to rate themselves on a scale of 1 to 10, 10 being the highest). The responses ranged from 2 to 9. Sushant continued by asking participants to say what they think creativity is (participant interaction: letting go, lots of ideas, curious, different perspectives, imaginative, previous knowledge, innovative solutions, new ideas, way with words). Sushant´s response was that many people believe creativity is visual, e.g. music and dancing, and he was pleased to see the participants had other ideas. He then asked everyone to do a small guided image. This involved closing eyes, relaxing the body and letting all thoughts go. The participants were asked to think of a moment when they were completely happy and to remember how they felt in that moment, and then to think of a moment when they were not, whether they were sad, bored, angry etc, to remember what was happening, how they felt etc. Participants were asked to give feedback on their feelings in both situations and to say what percentage of their life they feel completely happy and what percentage of their life do they feel anything but happy. Sushant stated that children aged 2 to 3 years old felt happy 95% of the time and that everyone is born creative and imaginative. So what decreases that creativity and imagination?

The participants then proceeded to take part in some creative activities. The first activity involved six volunteers who had to build a story one sentence at a time using one word that they were given by Sushant. The second activity was similar to Give Us a Clue? where a participant had to act out an expression for the others to guess. Then Sushant told a riddle which the participants had to solve. He then asked the participants what they thought caused the barriers to creativity as we got older (participation interaction: having too many activities, expectations from others, fear of failure, routine..). He then spoke about conformities and asked participants how many times a day we do things because ´that is the way it has always been done´ (participant participation: schools are full of these, toys / colours / emotions between boys and girls). These conformities are the biggest barrier for creativity. The second barrier to creativity is Comparison. It is human nature to compare people, but we are all different and do things differently. We need to teach children not to always compare themselves with others, and we need to appreciate everyone’s uniqueness. Sushant advised the participants to start at home – family members can stop each other when someone starts to compare. Then over time, build on this unit, for example start at school.

The participants were then put into breakout rooms of four or five persons and were asked to spend five minutes thinking about small actions that they could implement based on what they had learnt today.

The event was closed by the EPA President, Victor Petuya, who thanked all the speakers and moderators for their availability and support in the webinar, and all the participants for their attendance and active contribution. Victor hoped that all the ideas and conclusions drawn from the webinar were inspiring and will help to boost future collaborations between EPA and its partners. www.europarents.eu 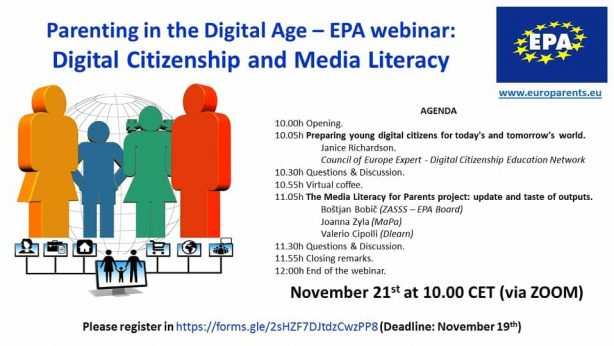 Parents’ contribution to the mid-term review of Erasmus+

The European Parents’ Association has conducted a survey among national...